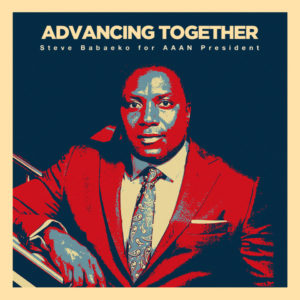 Steve Babaeko, who has served as the Public Secretary and is currently serving as the Vice President of AAAN has given 25 years to the Advertising game and his meteoric rise to the top of the industry proves his efficiency. His vast experience, both as an advertising man and as a leader at the forefront of the sector will prove to be very valuable to the AAAN.

Steve’s campaign slogan “Advancing Together”, fully encapsulates his Manifesto. His plan of action ranges from making reforms to empower women and providing equal opportunities for members of the Marketing Communications industry, to establishing a standard advertising academy for fostering the growth of talent available in the country. A more inclusive approach to Leadership is, quite frankly, long overdue and his agenda will be well received.

Steve Babaeko is widely regarded as one of the most creative minds in the country. He has been the Group Chief Executive Officer of X3M Group (made up of X3M Ideas, X3M Music and Zero Degrees and Babaeko Farms Ltd.) since inception, and has continued to push the boundaries of just what can be achieved in just about every sector he has ventured into.

AAAN was founded in 1973 as a sectoral body within the Nigerian marketing communications landscape and has become a force to be reckoned with both locally and internationally.

Here is What You Should Know About ...