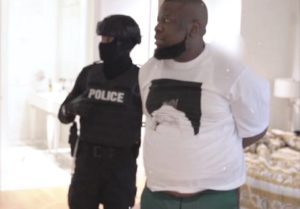 A new video depicting how Nigerian Instagram big boy, Ramon Abass popularly known as Hushpuppi was arrested has been shared on social media by Dubai police.

Recall the Nigerian millionaire was apprehended in a Rambo style in his Dubai apartment a couple of weeks ago for an alleged scam in the tune of $35 million believed to be monies meant for the acquisition of COVID-19 materials for native Americans and other criminal activities recorded by the police.

The video making rounds on social media bears the code name operation “FOX HUNT 2”. This operation was responsible for the capture of the Gucci Master and his associates. It brought to light the incriminating activities such as money-laundering, cyber fraud, hacking, criminal impersonation, banking and identity fraud by an online network belonging to the group.

However, Hush and his two close friends were not the only people caught in the web, 12 other people have been arrested in connection to the million-dollar scam which enabled them to steal money in the sum of 1.6bn Dhirams. Other items that were stolen by the group include over 25m Dhirams in cars and 150m worth in items.

The police were able to intercept some documents as evidence linking to the fraud case during the raid at their respective apartments.