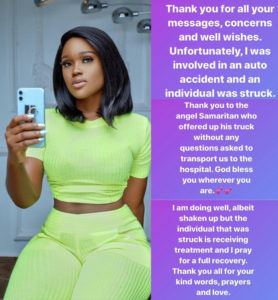 Former Big Brother Naija housemate, Cynthia Nwadora popularly known as Cee-C was said have been involved in a fatal road accident  in Enugu after the brakes of the ford truck she was driving failed.

In a video circulating on social media, the actress and media personality was seen panicking and walking distressed to the other side of the car where she nearly fell into a gutter but was saved by the bystanders present at the scene.

She has come out to confirm the news saying, the individual who struck by her car is currently receiving treatments, as she prays for a full recovery. She also thanked everyone for their kind words and prayers.

Ikorodu Bois Get Invitation to Extraction 2 ...