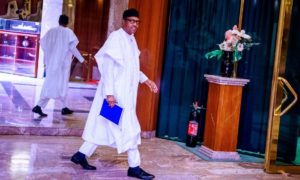 The APC Crisis takes a new turn as President Muhammadu Buhari backs Victor Giadom as the Acting Chairman of the All Progressives Congress.

Garba Shehu, the President’s spokesperson on Media and Public Affairs said that “The President has received very convincing advice on the position of the law as far as the situation in the party is concerned and has determined that the law is on the side of Victor Giadom as Acting National Chairman.”

He also said that the President will be attending the NEC virtual meeting called by Victor Giadom together with Governors and leaders of the National Assembly.