Go And Do Ritual With Yourself – Kanayo O. Kanayo Reacts To Those Who Tag Him As Ritualist 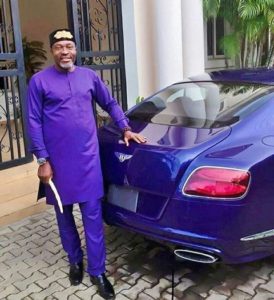 Veteran Nollywood actor Kanayo O. Kanayo has fired back at those who have tagged him as a ritualist due to the roles he plays in movies.

The Ace actor currently partook in the trending challenge on social media “‘dontleaveme” which spark some anger in the actor, after some Nigerians trolled him and tagged him as a ritualist under the comment section of his video.

After the Actor posted the video, an Instagram user took to the comment section to pled with him not to use his hype man for rituals. Reacting to this, Kanayo O Kanayo in anger told them to use themselves for rituals and desist from tagging him a ritualist.

“We are doing something about is Don’t Leave Me challenge, all you’re talking about is rituals. Go and do rituals with yourself. I’m playing a role. I’m not angry but the fact is that there are some people who don’t contribute anything to followership. All they want to do is distract you and when I go on their page, I see that they have only two people following them, meanwhile, I’m following about 1,000 people, so, why should I worry about you? But I don’t want you to distract others”

Mercy Eke Explains Why She Lost Her ...