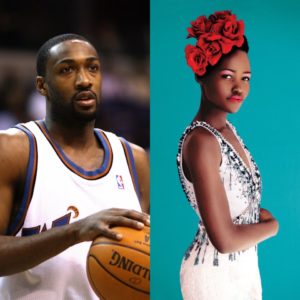 Former NBA star apologizes to Hollywood star Lupita Nyong’o for trolling her because of her dark skin.

The former athlete said he was so stupid to attack a fellow Black person for no apparent reason.

“We can’t come together as a race until the idiots of the race right their wrongs. My name is Gilbert and I was an idiot for attacking one of our queens for no reason. Lupita Nyong’o, I am truly sorry for my coon behavior. Black Lives Matter Dead And Alive #BlackExcellence.” he wrote.

His post impressed many people including his own fans and those of Lupita who duly congratulated him for his maturity and show of love.

In 2017, the 38-year-old athlete angered quite a multitude of people after making very derogatory remarks towards Lupita.

His attack on Lupita and other dark-skinned girls through social media did not  go well with many people who trolled him silly.

Arenas had claimed that only a few Black women are beautiful with Lupita standing out as the less hot in his list.

“Shame On You For Being The Bully ...