Social Media Platforms You Should Know Apart from Facebook 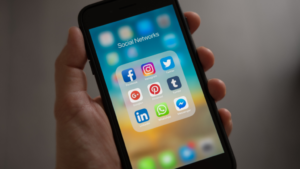 As we prepare for the upcoming social media day, here are social media platforms you should know apart from Facebook:

1- LinkedIn; LinkedIn is a business-oriented social networking service that was launched on May 5, 2003. It is mainly used for professional networking , including employers posting jobs and job seekers posting their CVs.

3- Flickr is an image and video hosting website launched in 2003. Many users use Flickr to keep personal photos, and it is also widely used as a platform for hosting images and videos.

5- Pinterest; Is a photo sharing website. This services allows users to submit images or “pins”, then other users can “pin” them on personalized “pinboards”. Users can then comment on each other’s content and interact with it. It was launched in 2010

7- Snapchat- is a multi media messaging app developed by Snap Inc. Launched in September 2011. The photo/video sharing and social media service is usually only available for a short time before they become inaccessible to their recipients.

8- Tiktok is a short video sharing and social media service used to create short dance, lip-sync, comedy and talent videos. It was launched in 2017.