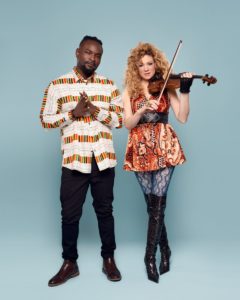 It’s about the girl next door and a boy that secretly developed a crush on her, but “She Don’t Know” about his special feelings for her. Its music video captures moments of secret love between five people who hang out in the NY dance studio. The music video cameos are played by dancer Royal Gale, DJ Buka and music artist Nestreya.

AfroStringz will be releasing more original productionsand remixes, including an upcoming collaboration with rap artist Fetty Wap. The new single, “She Don’t Know” is the premiere single off their Afrostringz EP scheduled for release in 2021.

Afro stands for renowned African producer “The Beat Boss” Young D from Nigeria while Stringz stands for Grammy-Award winning violinist/producer Miri Ben-Ari, originally from Israel. Afrostringz began when Young D. reached out to Miri after seeing her captivating violin feature on Diamond Platnumz’s crossover song “Baila”. Miri, who was familiar with Young D.’s production for the song “Bom bom”(Timaya ft Sean Paul), met Young D. in the music studio to collaborate on a few songs. The two quickly realized they have created a unique product and sound.