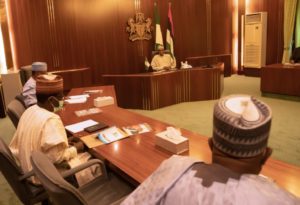 During the meeting of the Senate President, Ahmed Lawan and the President Muhammadu Buhari over the crisis rocking the All Progressives Congress (APC), the Senate president had pleaded with the president to step into the current crisis within the party and put and end to it.

The Senate President said “The situation should not, must not be allowed to degenerate further than it has, considering that this is the ruling party of the Federal Republic of Nigeria, with the president, with the control of the National Assembly, with more governors than any other political party”

Following this meeting, President Buhari has invited some governors elected on the platform of the All Progressives Congress (APC) to discuss the ongoing party crisis. The meeting is held behind closed doors at the Presidential Villa, Abuja. The governors in attendance are the Governor of Katsina State, the Governor of Jigawa State and the Governor of Plateau State.

Yemi Alade is Representing Africa at the ...