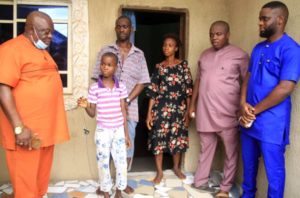 In a gesture that no doubt touches the heart, the Governor of Imo State, Hope Uzodinma, announced his decision to adopt the 9-year old Joseph Oluomachi Opara as his child. The 9-year old singer had gone viral on social media with the video of him singing Catholic hymns in a sonorous voice. The Governor also said that he will undertake to personally sponsor Joseph Oluomachi Opara from primary school to Catholic priesthood.