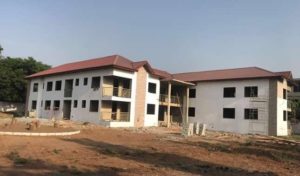 Armed men have stormed the Nigerian High Commissioner’ residence in Accra, Ghana with bulldozers demolishing a block of apartments on the property on Friday night.

The building was being constructed to house staff and visiting diplomats to the High Commission.

The men threatened to shoot staff of the embassy who were present at the scene if they interfere in their operations.

According to the head of security at the High Commission Emmanuel Kabutey the leader of the team that came to demolish the building told them they had the backing of National Security.

Officials of the commission reportedly contacted the police but efforts were not made to prevent the demolition.

The Nigerian and Ghanaian authorities are yet to react to the issue which comes five months after the ministry of foreign affairs denied reports that the Nigerian commission in Ghana had been evicted in Accra.

In a statement, Ferdinand Nwonye, spokesperson of the ministry, had said there was no “diplomatic row between Nigeria and the Republic of Ghana”.

Nwonye had said though the lease of the property on No.10 Barnes Road, Accra, has expired, the high commission was exploring the possibility of renewing the lease agreement with the host authorities. 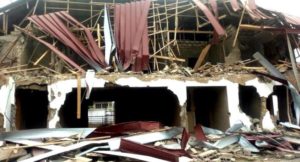