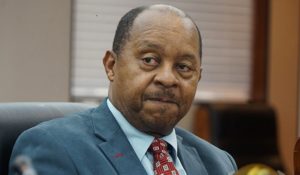 Zimbabwe’s health minister on Saturday was charged with criminal abuse of duty as a public officer, accused of illegally awarding a multi-million-dollar contract for COVID-19 testing kits, drugs and personal protective equipment to a shadowy company.

The country’s anti-corruption agency arrested Obadiah Moyo on Friday as the scandal roiled the country and played out on social media, where some local journalists exposed how Moyo allegedly chose the company to sell medical supplies to the government at inflated prices that included face masks for $28 each.

One of President Emmerson Mnangagwa’s sons was forced to issue a statement denying a link to the company after pictures emerged of the Zimbabwean representative of the firm enjoying the company of the president and his wife and sons at several events.

The representative, Delish Nguwaya, and some top officials of the national drugs procurement agency are already facing criminal charges related to the scandal.

Nguwaya is accused of lying in saying the company was a drugs manufacturing company based in Switzerland, “whereas it was merely a consulting company with no experience in the manufacture of drug and medical products,” according to the charge sheet.

The health minister, a former hospital administrator, faces a fine or up to 15 years in prison if convicted. The prosecution opposed bail, arguing he could flee before the conclusion of the case.