Saraki Appeals to the Police to Restore Ikenga Ugochinyere 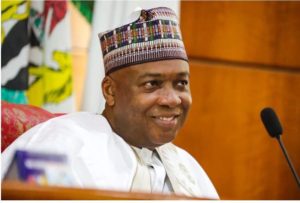 Following the arrest of Ikenga Ugochinyere, the former Senate President, Dr. Bukola Saraki has appealed to the Police to help the peace process by releasing Mr. Ikenga Ugochinyere. Ikenga Chineyere was arrested after a complaint of criminal libel was made against him by the National Assembly of Nigeria.

According to Dr. Bukola Saraki on his Twitter page, he is “pleased and aware that some stakeholders who believe in maintaining the balance between respect for the dignity of the National Assembly of Nigeria as an institution and freedom of speech/rule of law of the citizens are already seeking amicable solution to the issue.

“His release will further demonstrate that the National Assembly of Nigeria as an institution and pro-democracy activists are partners in progress, and that when occasional misunderstandings arise as we have it now, it will be peacefully resolved in a manner that strengthens our democracy.”