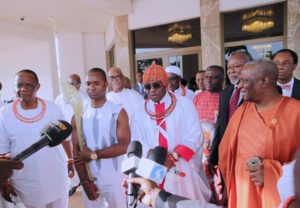 In a statement on Thursday, the Oba said that  “godfatherism” and “consensus candidate” must be eradicated from the politics of Edo state because these two “political vices” are antithetical to the fundamental basis of democracy.

The Oba has also debunked rumours that speculated that he was involved in partisan politics. He said, “Rumour mongers are reminded that there is an ancestral curse on anyone who attempts to tarnish the image of the Oba of Benin and the ancient throne of Benin Kingdom, which will normally be for their selfish ends.”

300 Nigerians Have Been Evacuated from UAE