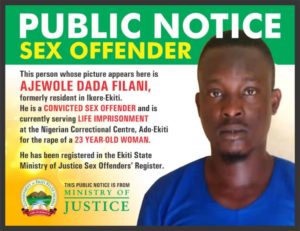 The Ekiti State Government has kept to its promise of dealing with rapists and sexual offenders in the state. The State Government has published the name and picture of a young man who has been convicted for raping a 23-year old girl in its sexual offenders register. The young man goes by the name Ajewole Dada Filani and he has been sentenced to life imprisonment at the Nigerian Correctional Centre, Ado-Ekiti. He is the sixth sex offender publicly shamed by the state.

D’Banj Loses an Engagement Deal with an ...