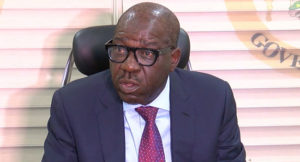 Governor Obaseki has officially joined the People’s Democratic Party. This was announced on the official Twitter page of the People’s Democratic Party, thus “Breaking News! The governor of Edo State, H. E. @GovernorObaseki has defected to our great Party, the @OfficialPDPNig. The declaration was made this afternoon at the state Secretariat of our party in Benin city, Edo State. Power to the people. #EdoIsPDP. @officialKolaO”