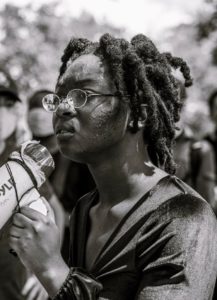 Oluwatoyin Salau is a Black Lives Matter protester who vanished in Tallahassee, Florida. For days, there was a police and community effort underway to find her after she disappeared hours after leaving a series of disturbing tweets.

Toyin herself put on Twitter about an alleged sexual assault right before she vanished.

She had tweeted about how she was sexually assaulted.

“Anyways I was molested in Tallahassee, Florida by a black man this morning at 5:30 on Richview and Park Ave. The man offered to give me a ride to find someplace to sleep and recollect my belongings from a church I refuged to a couple of days back to escape unjust living conditions,” her tweet thread began and added, “He came disguised as a man of God and ended up picking me up from nearby Saxon Street.” She also explained, “I trusted the holy spirit to keep me safe.” She then said how the man offered to give her a ride back to a church where she had sought “refuge” because of “unjust living conditions.”

Salau, who was a speaker at Black Lives Matter protests after the death of George Floyd, disappeared on June 6. On social media, people widely spread the news on June 15 that Salau’s body had been found (the term RIP Toyin even trended on Twitter); however, no credible confirmations gets.