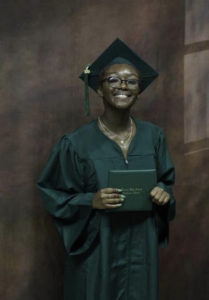 Black Lives Matter activist Oluwatoyin “Toyin” Salau, 19, was one of two women found dead in Tallahassee, Florida, on Saturday night, a week after she was reported missing.

Local officials said in a statement that they found Salau’s body, as well as the body of 75-year-old Victoria Sims, and that 49-year-old Aaron Glee Jr. has been taken into custody in connection with the deaths.

Any relationship between the victims or among the pair and Glee Jr. is unclear, and law enforcement did not immediately release more details about the case.

Salau was reported missing on June 6 and had gone viral on social media, with the hashtag #JusticeforToyin gaining widespread attention as activists and others called for an expanded search for the teenager. On the same day she was reported missing, Salau had tweeted that she was sexually assaulted and listed details about the man she said assaulted her, including that he was black, drove a white truck and appeared to be in his 40s.