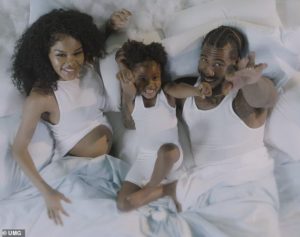 American singer-songwriter/actress, Teyana Taylor has revealed that she is pregnant and expecting her second daughter with husband Iman Shumpert.

The 29-year-old star unveiled the exciting news in her brand new music video for ‘Wake Up Love’, where she is seen kissing her NBA star husband Iman, as her 4-year-old daughter Iman Tayla (aka Junie) lifts up her shirt and reveals her baby bump.