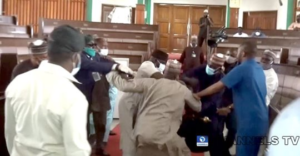 This is not the first time lawmakers in Nigeria are exchanging blows during a House Sitting. One would have thought that the spread of the Coronavirus pandemic and social distancing guidelines would prevent a physical fight among law makers but it wasn’t so as Kaduna State lawmakers engaged in a fist battle over mace.

The major cause of this fight was the impeachment of the Deputy- Speaker of the State House of Assembly, Mukhtar Isa Hazo who represented Milgoma constituency. He was immediately replaced with Isaac Auta from Kauru Constituency. The former Deputy-Speaker was impeached by 24 out of the 34 members of the Kaduna House of Assembly.

The fist battle occurred during the inauguration of the new Deputy-Speaker when a member attempted to snatch the maze which is the symbol of authority of the House. The attempt was foiled by other lawmakers and the Clerk of the Assembly promptly administered the oath of office on Isaac Auta, after which another member made a second attempt to seize the maze after the inauguration, but his efforts were quickly thwarted by the Sergeant at Arms, the chamber staff and other lawmakers.