Mass Killings in Borno on the Rise; A Need to Step up Security Measures 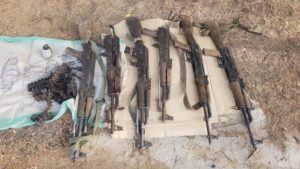 Attacks in the northern states of Nigeria have claimed the lives of hundreds of people over the years with the most recent massacre happening in Borno state. This horrid mass killing carried out by Boko Haram insurgents troops was conducted on Tuesday, 9 June 2020 in Zowo Borno state with 81 persons killed and 7 injured.

Many northern Nigerian states have suffered several dreadful Boko Haram attacks in recent times with the insurgents exploiting the villages to penetrate through the bush and launch attacks carrying out mass murders, kidnapping men, women and children, looting and killing soldiers.

Northern states are constantly plagued by gangs of armed bandits preying on villagers. Other times, these states experience clashes between herdsmen and farmers and the continuing Islamist insurgency of Boko Haram. This has exposed serious gaps in the Nigerian security and poor government as a whole.

Nigerian police officers and security personnel must do more and increase security in the country and particularly in affected states so as to put an end to the menace of insecurity. Where possible, the Federal government can as well seek for external or foreign military assistance to curb the dangerous threat and insecurity.