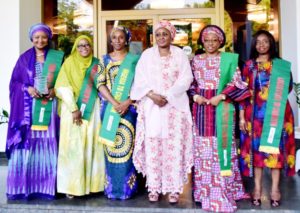 In a united response to the recent incidents of rape, the first ladies of the 36 states in Nigeria have come together to change the status quo by breaking the long-cultivated culture of silence and to also ensure that the perpetrators of this crime are brought to book. In the meeting held by the wives of the states’ governors, it was noticed that several states have not domesticated the international laws and conventions which protects the rights of the girl child and the women. This was seen as a huge problem by the forum and a decision was made to intensify advocacy for the states to do the needful by domesticating and implementing laws that would protect the rights of the girl child.

A communique issued and signed by the First Lady of Ekiti State, Bisi Fayemi states as follows: “‘We noted the calls by various concerned organisations to declare a State of Emergency on Sexual and Gender-Based Violence and we would like to add our voices to such demands.

“It was further noted that several States in the country have not domesticated relevant legislation to safeguard women and children from violence and very few States have a Sex Offenders Register. It was agreed that advocacy efforts will be intensified to ensure that legislation and implementation of such laws can be used to combat Gender-Based Violence.

“We, the First ladies of the 36 States of the Federation, have resolved to work assiduously with a range of stakeholders to break the culture of silence which has so far meant that perpetrators are not brought to justice because the parents and or family members of the victims and the victims themselves are prevailed upon not to report these cases. The First Ladies were unequivocal that this must stop.

“We will endeavour to provide shelter and safe houses in our various States for women in distress, as well as ongoing sensitization and support in safe spaces.

“It was further resolved that boys will be tutored as well on what constitutes sexual violence, and men will be encouraged to lend their voices to the various anti-GBV campaigns going on.”

What You Need to Know About Vitiligo