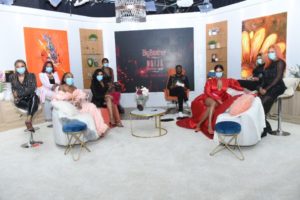 Since the show ended in October 2019, the housemates have moved on with their various lives. They have started businesses, received brand endorsement deals,  engaged in romantic relationship, amidst other life milestones. Mercy and Ike notably got their own reality show.

Anyway, if you reminisce on the last Big Brother Naija show, you’d definitely agree that the moniker ‘Pepper Dem’ was apt because those housemates did not come to play!

From a certain Lambo who came prepared to not repeat any outfit during her three-month stay in the house (she was in it to win it!), to Tacha who informed her fellow housemates that they “followed” her to the house, Omashola’s lit diary sessions, the frequent catfights, the lovebirds, and so much more.

The Pepper Dem housemates stayed true to their name as they brought us lots of drama and entertainment for three solid months.

The good news is that the drama isn’t over. The Pepper Dem Housemates are back for a reunion show ahead of the new season of the Big Brother Naija show!

The BBNaija Reunion show started on June 1 and will be airing every weekday all through the month of June.

So much has already happened in the past week.

The ex-housemates talked about people who should never have made it to Biggie’s house in the first place, and mentioned names like Esther, Jackye, Diane, Thelma, Cindy, and Sir Dee. Still, Seyi thinks if the post-BBN Diane had surfaced during the show, she would have given Mercy a run for her money.

Kim Oprah and Tacha had  a showdown too, but Tacha reminded everyone of her status of alpha female, and that she is not responsible if others feel insecure about her extreme confidence.

The BBNaija Pepper Dem Reunion will continue all through next week, and you know the housemates will bring the drama! Expect to see secrets revealed, old grudges reopened, and maybe someone will extend the olive branch?

Don’t miss next week on the BBNaija Pepper Dem Reunion, because it’s about to go down!

By the way, what do you think will be a good theme for season five of the Big Brother Naija show? BBNaija Lockdown Edition?