General Sani Abacha Died in Office This Time 22 Years Ago 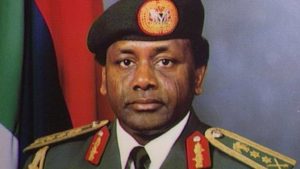 Yesterday, 8th June, marks 22 years when General Sani Abacha died in office. The former Head of State was known for his iron grip and massive abuse of the fundamental rights as well as complete disregard for the Constitution of the land.

The Head of State was born in Kano state and went for a military training in Kaduna state. The Head of State fought vehemently against the rise of Biafra secession from the country, which led to gross abuse of the fundamental human rights. Apart from that, his military rule was in charge of the killing of certain environmentalists who were protesting against the activity of the government and Shell. This killing was widely condemned and Nigeria was withdrawn from The Commonwealth. Apart from the infringement on the right to life, he also infringed on the right to freedom of expression.

The death of General Sani Abacha was majorly and commonly a huge relief to the people as his death signified the end of a harsh military rule.