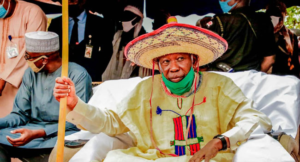 The Kano State Governor, Abdullahi Ganduje has called the attention of the Federal Government to review the West African Protocols that allowed for the influx of foreign herdsmen into the northern part of Nigeria. The Governor said that the recent influx of the foreign herdsmen has been the major cause of insecurity in the northern part of Nigeria.

He said, “One can clearly see that these migrating herdsmen always move with dangerous weapons and are the ones causing conflicts in most places around the North and the nation at large”. The Governor also suggested to the Federal Government that the current border closure could be extended to neighbouring countries so as to prevent the entry of armed herdsmen into the country.

BANDITS ATTACK IN NORTHERN NIGERIA: WHAT COULD ...