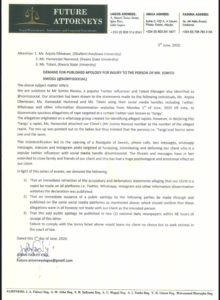 Following a false rape allegation by three girls against Somto Nwosu, the three girls; Anjola Obisesan, Hameedat Hammed and Omotolani have said a public apology on Twitter, claiming that they mistakenly sent his name and number to their female WhatsApp group where they accused him repeatedly of rape.

Initially, Somto Nwosu had tweeted that he was not going to be taking any further legal action against the girls for defamation. He also disclosed in the tweet, “In light of their acknowledgement of being wrong, and after series of discussions with the Nigerian Government and respected lawyers of the Country. These three girls have been forgiven and pardoned for their crime”.

“Apparently the apology letter/Video is NOT enough to clear my name in the Nigerian books. Ladies, We are going to COURT.”

He also showed proofs that a letter of demand for a published apology has been sent to the offenders’ mail in question. The letter demanded the following:

a. That an immediate retraction of the accusatory and defamatory statements alleging that Somto Nwosu is a rapist be made on all platforms, that is, Twitter, WhatsApp, Instagram and other information dissemination websites the declaration was published.

b. That an immediate insuance of a public apology be made through and published on the same social media platforms mentioned above, which should confirm that these allegations were in all honesty not made with Mr. Somto Nwosu as the intended person

c. That this public apology be published in two national daily newspapers within 48 hours of the receipt of the letter