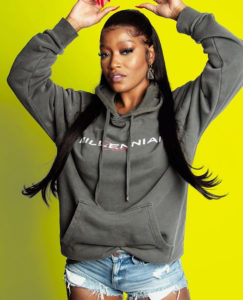 Hollywood Actress Keke Palmer made a passionate plea to National Guard troops during a protest in Los Angeles on Tuesday, asking them to join protesters marching through the streets in honor of George Floyd.

In the video, the 26-year-old speaks directly to National Guard troops, saying President Donald Trump’s actions are further fueling the divide between protesters and authorities.

“We have a president who is trying to incite a race war,” she says. “You have people here who need your help. This is when y’all stand together with the community, with society, to stop the governmental oppression. Period. We need you.”

The guards respond positively, saying that they agree with Palmer’s sentiments.

“Then march with us, march beside us,” she pleads. “Let the revolution be televised.”

“Show us that you’re here for us,” she says, as the crowds of protesters cheer and chant “March with us!”

One of the officers extends his hand to Palmer and offers to march with protesters down the street, explaining that he needs to stay near his post. 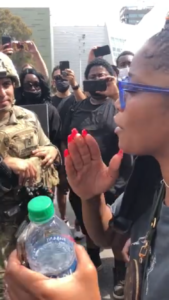