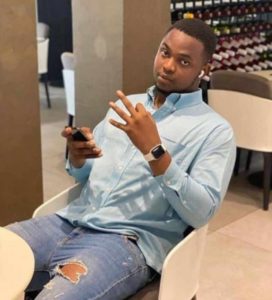 24 ladies have come out to accuse a real estate agent, Godknows Adolphus, of rape.

The ladies, in a series of tweets on Tuesday, said Adolphus, also known as Yangy on the social media, took advantage of and defiled them.

Yangy was also described as a student of a private university in Ogun State.

One of his victims, who sent a direct message to a Twitter activist, Angie, said she was afraid of coming out because of stigmatisation and possible backlash on the social media.

The victim stated in the message to Angie that the modus operandi of Yangy was to be friends with ladies and later invite them over to his house or his uncle’s hotel in Port Harcourt, Rivers State, where he used to defile them.

The message read in part, “There is this guy I want you to help me warn girls to stay away from because he’s always inviting people over and raping them. I’m also among his victims; I can’t speak for some reasons or even use my handle because I can’t bare answering questions from people.

“This guy I’m talking about, we used to be friends till he raped me and his excuse was that he was tempted. Please, I want you to tell as many girls that are going to see this that the guy that calls himself Yangy is a rapist and they should beware of him.”

The revelation of the lady prompted other supposed victims to come out and narrate their experiences with Yangy to Angie.

Another victim in a direct message to Angie stated, “I was 14 at the time and he lied to me that he was 17. He manipulated me thinking that we were in a serious relationship and forced his way on me the day I went over to see him. I told him to stop severally cause it hurt as I was a virgin but he didn’t stop. So he isn’t just a rapist but a paedophile.”

Other supposed victims also released their WhatsApp conversations and voice recordings, where he allegedly admitted to raping them.

Reacting to the allegations, Yangy on his Twitter handle, @yangy_adolph, said he was not involved in any of the alleged incidents, adding that he would contact the relevant authorities over the allegation.

He tweeted, “Ordinarily, I would have ignored the rumour peddling around but for posterity sake, let me categorically say that I have no involvement in the alleged rape.

“As we all know, rape is a serious offence in the world and is something that no one can condone. I strongly stand against rape in all entirety. However, I would inform the relevant authorities concerning this allegation for my reputation.”