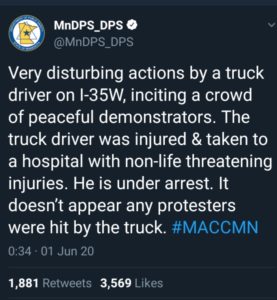 A very disturbing action occurred during the Black Lives Matter protest on Minneapolis freeway as a truck driver drove through the protest, making a lot of protesters run for safety. The situation was a very strange one, however, no protester suffered any injury even though the truck driver was injured and had been arrested by the police.

No one has been able to ascertain the motive of the truck driver; however the Minneapolis Governor has ordered that the truck driver should be charged to the fullest extent.

HOW RAPE CULTURE AFFECTS THE SAFETY OF ...

REASONS WHY YOU SHOULD QUIT SMOKING: WHO ...