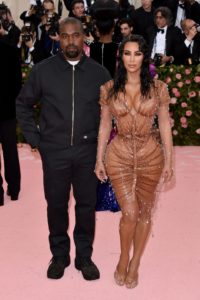 Kanye West and Kim Kardashian have threatened to sue Ex-personal bodguard, Steve Stanulis for disclosing personal information of the rapper and his family to the public last month.

Kim, and Kanye, have reportedly sent a cease-and-desist letter to Kanye’s ex bodyguard Steve Stanulis, alleging he made ‘false and defamatory statements’ and breached a confidentiality agreement on the Hollywood Raw Podcast last month.

According to the agreement, Steve is not permitted to speak about personal / business related issues or give off any form of information about the West family

Stanulis, who was reportedly fired by the rapper back in 2016, said that he was given ‘ridiculous rules’ to abide by and described the Famous star as ‘one of my least favorite people to work with over the course of time’ on the podcast.

He has been served a cease and desist letter which states that he would be sued for $10million should he ever do such for the second time.