Killings in Southern Kaduna: My people are under the bondage of Terrorists- Senator La’ah 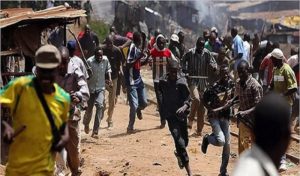 ABUJA- SENATOR, representing Kaduna South Senatorial District, Senator Danjuma La’ah, Peoples Democratic Party, PDP has disclosed that plans are in top gear where he would meet with other elected federal representatives over the massive killing of his people where a decision would be reached for the people of the zone to defend themselves.

Senator La’ah who condemned in very strong terms, the killing of his people in their homes while adhering strictly to the stay at home order by the Federal and State governments following the outbreak of the Coronavirus, COVID- 19 Pandemic, said that the people of Southern Kaduna are under the bondage of Terrorists.

Speaking with Journalists yesterday in Abuja, the lawmaker who is the Chairman, Senate Committee on Federal Character and Intergovernmental Affairs, however, accused the military and other security agencies of abandoning his people when the people really needed their attention, just as he alleged that Governor Nasir El Rufai of Kaduna state was not cooperating within his efforts as a Senator to nip in the bud, the killings.

According to him, the killings are affecting his performance as a lawmaker representing the people, even as said that he is demoralised, adding that it is against this backdrop that he is calling for the establishment of indigenous Police because they will know precisely where the attacks are coming from, the modus operandi of the attackers and their hiding places.

When asked if the killings have religious colouration, Senator La’ah said, “I cannot say whether it is a religious or tribal crisis, but honestly the wanton killings and massive property destruction is uncalled for. It is even getting worse during this period of lockdown because the bandits are still moving about, killing innocent souls in my area, who obey government directive to stay indoors

I and colleagues in the House of Representatives will sit down and think of the way forward and ask our people to henceforth defend themselves.