“I was terrified to ask her out…” || Chude Jideonwo talks religion, spirituality and an old crush on Charly Boy’s daughter 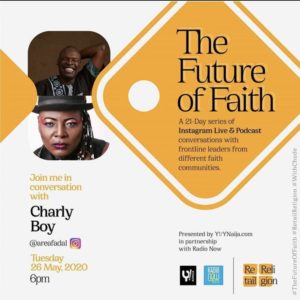 May 28,2020 – As Chude Jideonwo, founder of Joy, Inc., continues to unveil an exciting line up of respected voices from different faith communities in Nigeria, he thrilled viewers with one of his most heartfelt interviews yet as he featured eccentric entertainment icon, Charles ‘Charly Boy’ Oputa on the latest episode of The Future of Faith series.

“I want the younger generation to know that apart from music, creativity and activism, you are one of the founding fathers of Nigerian talk shows,” said Chude while introducing Charly Boy.

They both explored the intricacies, misconceptions, outright neglect, conflation, and monetization of religion as well as true spirituality, something both of them have discovered beyond religious affiliations.

A strong social justice advocate, Charly Boy spoke about his firm belief in spirituality over organized religion, and the peculiarity of religion in Nigeria.

“I am very serious about my relationship with the message of Jesus Christ, even though I have a fault with organized religion. It starts to look to me like our [Nigerian] government has a different kind of God. A God who wouldn’t mind taking a bribe, [one] who is [touted] by people who aren’t [even] spiritual. People must sit down and understand the precepts of spirituality.”

The episode was a spirited and heartwarming session that offered a nuanced and insightful look into the mind of an iconic guest on a unique kind of spirituality and how, if practiced, it can influence culture, politics and societal systems.

The longtime acquaintances also took a minute to revisit warm memories of their first encounter and how an 18-year-old Chude dared to ask one of Charly Boy’s daughters, whom he was smitten with, on a date, at a time when he was one of Africa’s hottest names in entertainment.

“I was terrified to ask her out, because who was I? This boy from Ijesha asking ‘the’ Charly Boy’s daughter out on a date,” said Chude while recounting how the ‘Area Father’ granted them his blessing.

The Future of Faith is one of the facets of #WithChude, a series of multimedia conversations which underlines social issues, raises social consciousness, and sparks social movements across emotions, intellect and spirituality.

The series will be coming to TV subsequently, with an extended podcast edition across multiple podcast platforms. Follow Chude Jideonwo on his Instagram page @chudeity to stay abreast of new episodes.

RACISM STILL A MAJOR THREAT TO THE ...