Mercy & Ike Show: Will they grow through this difficult time, or Grow out of love 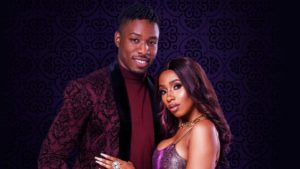 Mercy and Ike is the latest African Magic’s reality show, which shows the love life of Mercy Eke, winner of 2019 Big Brother Naija TV reality show, and fellow housemate Ike Onyema. Their relationship started in the Big Brother house and their unlikely bond have continued ever since. This reality TV show has been a revelation of what they have both been through and how they let love lead. The show premiered last month, April 26th, 2020 but another exciting episode (episode 5) was aired yesterday, May 24th, 2020.

In this episode, Mercy and Ike started off with an argument upon her arrival from London. Whilst Mercy was in London, a picture of her hanging out with London based musician, Willie XO, as she sleeps on his lap in a photo was posted online and this sparked up conversations online. Ike seemed to have allowed people’s opinion to cloud his judgment, as he now doubts what mercy has with Willie XO was just friendship. Mercy accuses Ike of choosing money over her, because they had both discussed the trip and Ike had agreed for her to go visit Willie XO, in London for the money, Ike went ahead to ask Mercy to unfollow Willie XO online, which seemed like she did after a heated argument, as she walks back into the house unhappy and sad.

Ike stated that if Mercy wanted to leave the relationship, she would have to pay him the sum of five million naira, in order for Mercy to go freely.

A fan calls Mercy to talk about her relationship with Ike, as she tells Mercy that Ike has changed and improved, after listening to the fan Mercy concluded that the lady only called to support Ike and didn’t care about her.

Mercy hangs out with her friends to discuss her relationship with Ike, and after a long conversation, they concluded Ike isn’t giving back the love Mercy shows him, as they said a man that loves you won’t tell you to go meet another man for money, one of Mercy’s friends says Mercy is the one chasing Ike, and her other friend added that Ike is only using Mercy to get money and fame.

In the teaser for the next episode, Ike tells his cousin it would get to a point when he would be asking “Who is Mercy?”.  Mercy is seen in a car with Ike, and she tells him she would not allow anyone to drag him even if they were no longer dating and she breaks down in tears.

Do you think Mercy would take action on what she discussed with her friends? You can find out in the next episode.

50 trafficked ladies arrive in Nigeria from ...