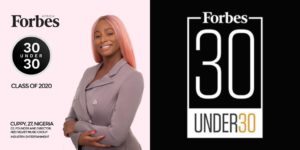 The Forbes list usually covers various categories from entertainment, tech, food and drink industry, sports and the likes. Those who made the list this year are said to have impacted their community one way or the other. Several young entrepreneurs from other African countries like Cameroon, Malawi, Tanzania, Kenya, Zimbabwe, Morocco, Sudan and Ivory also made the Forbes list.

THE EFFECTS OF SOCIAL DISTANCING ON THE ...