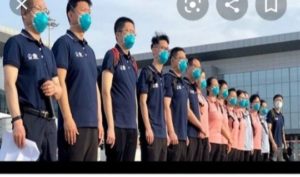 Following the comment of the minister of health about his ignorance of the whereabouts of the Chinese doctors and the resulting public fear, the Minister of Interior, Rauf Aregbesola has come to calm Nigerians down by revealing the mission and activities of the Chinese doctors allowed into Nigeria. The Minister of Interior has mentioned that the experts came from Nigeria in order to assist the China Civil Engineering Construction Corporation (CCECC) to build and equip isolation centres.

He also mentioned that the Chinese experts were only given a 30-day visa and they are unable to return to their country due to the continuous ban on airspace travel. The Minister of Health has also confirmed that the Chinese experts were not the guests of the Federal Government, instead, they were the guests of the China Civil Engineering Construction Corporation (CCECC).

This has however raised series of doubts in the minds of the public as Nigerians were made to believe that the Chinese visitors were indeed doctors who came into the country to treat those infected with Covid-19. However, Rauf Aregbesola said “indeed 15 Chinese nationals came into Nigeria on 8th of April. They are here on the bill of the CCECC, a Chinese company doing some works for us in Nigeria in conjunction with some Nigerian companies they agreed to support us in the effort to respond to the pandemic.

“At Idu isolation centre in Abuja, they participated in retrofitting and equipping the isolation centre. They equally worked on the Dome project, that was handled by the NNPC Construction in conjunction with ThisDay.

“So, those are the locations in which they came to work. Both in retrofitting the Iju facility and installing critical essential medical equipment”.

CHANGE OF GENDER IS NO MORE LEGALLY ...