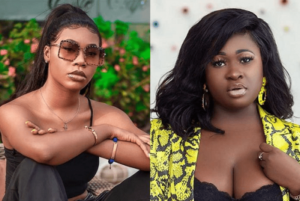 Singer Sista Afia and rapper Freda Rhymz seem to have taken their lyrical beef to another level as it has now become physical.

The artistes, in a viral video, were about to throw punches at each other at the premises of Media General had it not been for the intervention of the crew.

In an interview with 3FM on Saturday Sista Afia jokingly said she will beat Freda when they meet.

Perhaps true to those words, a video has gone viral showing her taking off her shoes, handing her bag to one of her crew members in readiness to fight Freda Rhymz.

Although the manager of Freda Rhymz took her away from the scene, Sista Afia followed them and threatened to slap the security who had asked her to calm down.

This confrontation follows a two-week-long feud between the two artistes along with Eno Barony.

Sista Afia ignited a lot of controversy after the release of her song ‘WMT’ which many had said was a diss song to some female artistes.

The song was met with counter jabs and reactions from Freda Rhymz who released ‘KMT’, and Eno replying with ‘Rap Goddess’.

Freda Rhymz, who didn’t want to be left out of the beef party, also released ‘Point of Correction’.