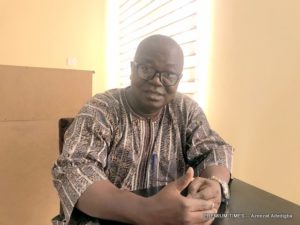 The ASUU President, Biodun Ogunyemi, said “the first comment is that we wondered how they could have used the IPPIS platform when our members didn’t submit BVN or sign into IPPIS. The impression we were given before is that before the government could use IPPIS, people must submit themselves for data capture, biometrics capture and so forth. But that did not happen in this instance”.

“So if the government could go ahead and use the IPPIS to pay salaries, it means our suspicion is being confirmed which means they can manipulate that platform as they want. This is because if people who did not register on IPPIS are being paid through IPPIS, it means that anybody can be imported into that system and that has been our suspicion all along. We have said that the IPPIS is not waterproof as claimed.

“Secondly, by using IPPIS to pay our members (because in the alert, it was clearly stated there; the IPPIS was mentioned in the alert) we have also seen the inadequacies of that platform. When the government called us for a meeting in July 2019, it said all the fears had been addressed. How come, this time around, by using the IPPIS, you distorted people’s salaries?

“Our members are saying the government amputated their salaries. They removed from some people’s salaries. The pay slips are nowhere and the cooperative deductions, union dues and all the third party deductions are nowhere to be found. You now start to wonder whether this is the system we need.

“As we have been saying, the alternative we have been working on is in progress and we will soon unveil it to Nigerians.”

HOW TO PROTECT CHILDREN DURING THE PANDEMIC

I once thought I was a failure ...