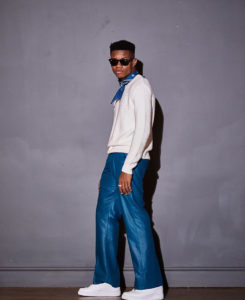 Chief Executive Officer of Event It Ghana and Head of Class TV, says his outfit, will never air any song from Ghanaian artist Kidi’s camp until he renders an unqualified apology to host of Ayekoo Ayekoo, Nana Romeo and the entire Class Media Group for disrespecting their show.

This comes after the highlife musician, was sacked by Nana Romeo from his studio for appearing late on his show.

Kidi, was booked for an interview on the show, ‘Ayekoo Ayekoo’ at 11:00 am but only got there at 11:30am which did not go down well with Nana Romeo. As a result, the interview was cancelled.

“First of all apology to the listeners. It looks like you are attacking me…,” Kidi apologized.

Ricky Anokye after hearing the issue, called DJ Premier who is believed to be part of Kidi’s success story to tell Lynx Entertainment to apologize to the Class Media Group before he removes his songs from all the 10 radio stations under Class Media Group and Class TV.

He says, Kidi needs to be sacked for disrespecting time and authority.

“I need to get an apology from him. They have money so if Lynx has other radio stations they should go…..He deserves to be sacked. They should respect time and authority,” he said