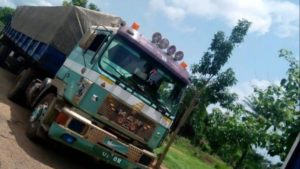 The Ogun State Traffic Compliance and Enforcement Agency intercepted a group of suspected Almajiris who were coming into the state. The Almajirs were hidden in a truck with registration no. Kano XG172KNG and was said to be covered with tarpaulin, in a bid to deceive the road officers that they are transporting goods and food items.

However, the Ogun State Traffic Compliance and Enforcement Agency insisted on inspecting the truck despite the attempts of the trucks driver to convince them otherwise. On inspection, the officers discovered that the suspected Almajiris were packed with pepper. The truck was turned back and was not allowed into the state.