HOTEL AND NIGHT CLUB SHUT DOWN IN BADAGRY, LAGOS 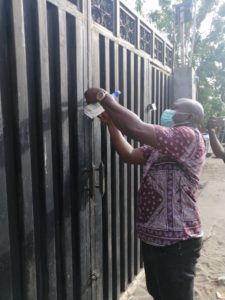 After news reached the Lagos State government that two facilities in Badagry, Lagos were not following the guidelines given to hotel and club managers, the Government has decided to shut down the facilities known as Maggi Hotel and Tambari Theatre Art (a night club).

Further more, the Lagos State Government has decided to prosecute the managers of the hotel for failing to comply with the guidelines issued by the Minister of Tourism, Arts and Culture and also for the high level of immorality going on in the facilities.

Mr. Solomon Bonu, Special Adviser to the Governor on Tourism, Arts and Culture, said “it was also discovered that there is a high level of immorality going on in these places. The Night Club has become home for strippers, drug barons, and all sorts of mischief.”