Two Nigerian students have been arrested for peddling drugs in Cyprus 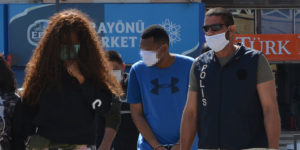 It is reported that a total of 17 grams of wrapped drugs have been retrieved from the students, one of whom was a lady (Uduak) who was reported to have sold drugs to the Department of Narcotics and Anti-Smuggling in Cyprus.

One of the suspect, Uduak is a popular lifestyle influencer on social media. Popularly known as @uduakisbae on Instagram and Twitter.

Gay model Kyle walks out of his ...