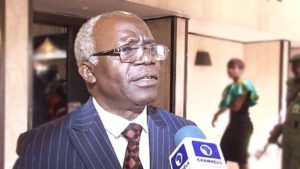 The Corona virus pandemic has prompted several actions, proactive and otherwise nationwide. The response of the Nigerian government being the passing of a new Infectious Disease Bill.

Such actions have been criticized by Human rights Lawyer and Senior Advocate of Nigeria Mr Femi Falana who in his statement to the press goes to point out that the new bill is superfluous, unnecessary and a waste of tax payer income by the legislative.

Dino Melaye has also joined in challenging the reasons for the Infectious Disease Bill by instituting a fundamental rights application against Femi Gbajabiamila, the Speaker of the House of Representatives, Abubakar Malami, the Attorney-General of the Federation and Mohammed Adamu, Inspector-General of Police pursuant to Sections 34(1), 35, 37, 38, 40, 41(1), 44 and 46(1) of the 1999 Constitution of the Federal Republic of Nigeria (as amended) in the Federal High Court, Abuja.

Dino Melaye’s contention is that the bill seeks to turn private properties and any other property into isolation centres. In his response, Gbajabiamila said “since then there has been a barrage of criticisms and accusations, including allegations that the proposed bill is a product of inducement by foreign interests. The bill, which is still a proposal subject to consideration, amendment and improvement, has been assailed as a sinister attempt to turn Nigerians into guinea pigs for medical research while taking away their fundamental human rights.

“Suffice it to say that none of these allegations is true. Unfortunately, we now live in a time when conspiracy theories have gained such currency that genuine endeavours in the public interest can quickly become mischaracterised and misconstrued to raise the spectre of sinister intent and ominous possibility.”