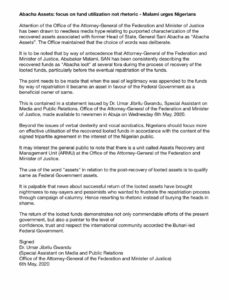 The Attorney-General of the Federation, Mr. Abubakar Malami (SAN) was heavily criticized by the public and media on Twitter for calling the funds Abacha looted “Abacha’s assets”.

The Attorney-General has however come out to respond to the public by stating through his Special Assistant on Media and Publicity, Dr Umar Gwandu, that the looted funds have already been returned to the Federal Government and thus, the funds qualify as Federal Government’s assets which he meant.

The Attorney-General of the Federation also urged Nigerians to look away from the mere language semantics and focus on the appropriation and utilisation of the public funds.

His Special Assistant on Media and Publicity, in his statement also said ” it is to be noted that by way of antecedence that Attorney-General of the Federation and Minister of Justice, Abubakar Malami, SAN has been consistently describing the recovered funds as ‘Abacha loot’ at several fora during the process of recovery of the looted funds, particularly before the eventual repatriation of the funds.