Yvonne Orji shares trailer of her new comedy special on HBO, “Momma, I Made It.” 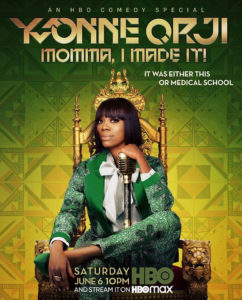 Nigerian-American actress and comedian, Yvonne Orji known for her role as Molly in the HBO series Insecure shares trailer of her new comedy special, Yvonne Orji: Momma, I Made It!, premiering on Saturday, June 6th on the network.

Momma, I Made It! was written, performed, and executive produced by the 36-year-old Insecure star, whose other credits include A Black Lady Sketch Show, the upcoming film Vacation Friends, and podcast Jesus & Jollof, co-hosted with Luvvie Ajayi.

The less than two-minute trailer features personal footage shot of Orji’s trip “home” to Nigeria earlier this year and a live stand-up performance at the Howard Theatre in Washington, D.C.