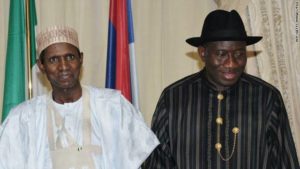 Yar’Adua served as governor of Katsina State from 29 May 1999 to 28 May 2007 before being declared the winner of the controversial Nigerian presidential election held on 21 April 2007, and was sworn in on 29 May 2007.

In a series of tweets on Tuesday, Jonathan Remembers his former boss.

It has been a decade since His Excellency President Umar Musa Yar'Adua was snatched by the cold hands of death. On this day, every year, his image fills our consciousness as a mark of  his selflessness, typical modesty and exceptional flair.

WILL OFFICES EVER RECOVER FROM THE CORONAVIRUS ...