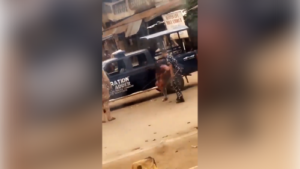 The Nigeria Police Force on Friday said it had dismissed two officers, who assaulted a woman, Tola Azeez, in Osun State

The police said the dismissal of the erring police officers, Inspector Ikuesan Taiwo with AP NO 251724 and PC Abass Ibrahim with Force No. 509634, was preceded by a trial where they were found guilty of assaulting Azeez.

The duo attached to Iwo Division of Osun State Police Command were seen assaulting the woman at the Odo Ori Market, Iwo, Osun State, in a video that went viral.

In the video, the police officers interrogated the woman on an unknown issue and soon began pulling her by the clothes she wore.

Taiwo and Ibrahim continuously flogged her with whips amidst pleas by sympathisers to stop the assault.

The Inspector-General of Police, Adamu Mohammed, called for a full investigation after seeing the video.

“The investigations have been concluded and the police officers have been dismissed. They would be arraigned in court soon,” the police said.

“When Your Husband Beats Your House Help ...