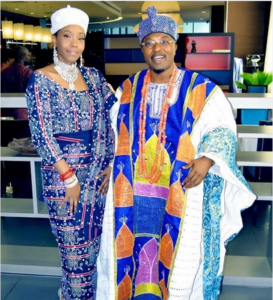 Chanel Chin, the estranged queen of the Oluwo of Iwo, Oba Abdulrasheed Akanbi has made some controversial allegations about her king and husband after parting ways with him.

She revealed that Oluwo Oba took advantage of her after she was drunk on alcohol.

Narrating how it all started in an interview, Chanel recounted that she came to Lagos from Canada as a tourist to visit the country and even see other places in Africa.

She said that she attended the coronation of Oba Akanbi on January 16, 2016 and was later introduced to him by a friend at a party.

According to her, she took in a lot of alcohol which got her quite intoxicated and then walked into her room where she was lodging to sleep only to wake up and find Oluwo of Iwo on top of her with her dress removed.

She alleged that this incident occurred on February 2, 2016.

Chanel Chin added that the following that, Oba Akanbi marched her into the palace where he introduced her to her family as his wife-to-be.

The Canadian-based entrepreneur disclosed it was out of her rape experience that got her pregnant and gave birth to Oluwo’s son on November 16, 2016.