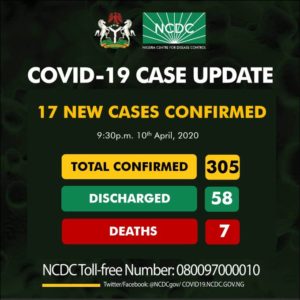 Confirmed coronavirus cases in Nigeria reached 305 on Friday as Easter celebrations begin around the world with people stuck indoors.

The Nigeria Centre for Disease Control made this known via its Twitter handle on Friday.

It tweeted, “17 new cases of #COVID-19 have been reported as follows: eight in Lagos, three in Katsina, two in FCT, one in Niger, one in Kaduna, one in Anambra and one in Ondo.

Seventeen new cases of #COVID19 have been reported as follows:

As at 09:30 pm 10th April there are 305 confirmed cases of #COVID19 reported in Nigeria. 58 have been discharged with 7 deaths pic.twitter.com/0STe5QWxMd