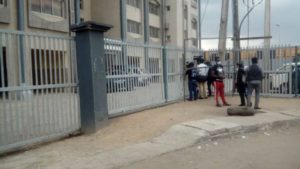 The Lagos State Government charged the musician before the Lagos State Magistrates’ Court in Ogba for attending a crowded birthday party in violation of the social distancing directive to check the spread of coronavirus.

The birthday party was organised by actress, Funke Akindele, popularly known as Jenifa, for her husband, Abdul Rasheed Bello. The two were sentenced to 14-day community service on Monday.

At the court on Wednesday, a policeman, Suumonu Kazeem, ordered the gates of the court shut against journalists, saying he was acting on an order from above.

The trial is currently underway, with journalists unable to gain access to the court premises.