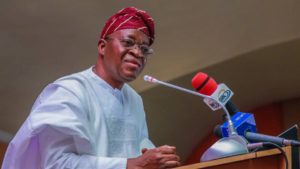 Osun State Government on Saturday said one of the patients at the Coronavirus Isolation Centre in the Ejigbo area of the state was missing.

The government also denied reports that six of the patients at the Isolation Centre had fled the facility.

There were online reports on Saturday morning claiming six of the 18 coronavirus cases, who returned positive amongst the 127 returnees from Ivory Coast, had fled the isolation centre.

But the government in a statement by the commissioner for Information and Civic Orientation, Funke Egbemode, dismissed the report and said after headcount, only one person could not be accounted for.